Lyme disease, what is it?

Lyme Disease is one of the fastest spreading bacterial infections across the world. It is usually transmitted by a deer tick but now some scientists and doctors believe it can also be transmitted by other biting insects like mosquitos, biting flies, fleas, and mites. It has also been found in human tears, breast milk, urine, and semen and has been shown to pass to babies in the womb.

Disclaimer: I’m not a doctor and what I share here is based on research I have done. If you suspect that you or a loved one has a tick-borne disease please seek out a physician who will be capable of diagnosing and treating.

Lyme bacteria are spirochetes, called Borrelia burgdorferi sometimes referred to as Bb, and is named after Dr. Willy Burgdorfer who discovered it in 1982.

Spirochetes are shaped like a corkscrew which can literally drill their way through every part of your body. There is not an organ or a system of your body where they cannot devastate. 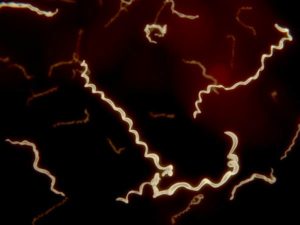 Early Lyme symptoms might include a bulls-eye rash, fever, and/or flu-like symptoms. Dr. Richard Horowitz, author of his new book “Why Can’t I Get Better”, states that only 50% of people infected with Borrelia will get a rash and 50% of those will get the classic bulls-eye. Many go undiagnosed or misdiagnosed because of this. 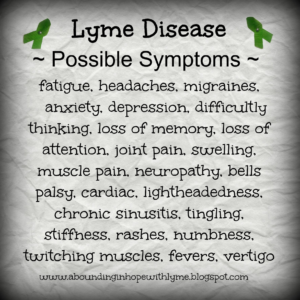 Other symptoms may include psychiatric symptoms such as depression, OCD, ADHD, schizophrenia, anxiety and panic disorders. It can cause seizures, vision impairment, respiratory symptoms, thyroid and hormonal problems.

Symptoms in children may appear differently than in adults. They may tire easily, be agitated more frequently, seem defiant and disrespectful. They may begin to have difficulty in school especially with reading comprehension, problem solving and Math.

How Borrelia Survive and Thrive

From what I’ve studied about Borrelia, they’re very smart, very stealthy and they live like parasites inside your body, taking from you what they need to survive and hiding from detection. They’re not always found in the blood and they have a very tricky way of evading the immune system. This is another reason antibody tests are unreliable.

Borrelia lives in 3 different forms, spirochete, L-form and cystic form. When Lyme bacteria encounter antibiotics they will change into their cystic form grouping together building a “force field” around themselves, in order to protect themselves from the threat.

Once the threat is gone, the cysts will turn back into one of the other two forms and they’ll continue their destruction all over again. This is one reason many people relapse after a course of antibiotics.

When Borrelia have been present in your body for any length of time you could feel a little off with minor symptoms or become severely ill and possibly needing hospitalization. This is entirely dependent upon your immune system, the coinfections you contracted with Lyme and the length of the time you’ve had the infection.

If you’re like many, you may have migrating pain. For a week or two, you’ll think your sciatic nerve is acting up and then the next thing you know your shoulder hurts so badly that you’ll try to remember if you pulled it somehow. This drives physical therapists nuts, by the way, I know from experience.

There are two sources for information about Lyme disease, one is the IDSA and the other ILADS. The IDSA is the Infectious Diseases Society of America, they do not support the claim that Lyme can become a chronic infection.

The IDSA works closely with the Center for Disease Control (CDC). The CDC recently reported that their earlier statistics of only 30,000 people being diagnosed with Lyme a year are inaccurate and that the numbers are actually 10x higher bringing it to about 300,000 annually diagnosed and reported. This number does not include those who have it and are misdiagnosed or have not been reported.

Despite this report and that the CDC states on their website that Lyme needs to be diagnosed based on symptoms, they still require doctors to perform 2-tier testing using an Elisa and then a Western Blot. These are both blood tests.

The first test, the Elisa is grossly inaccurate and a complete waste of time according to ILADS. The CDC recommends that you get a Western Blot antibody test only after the Elisa comes back positive. Many doctors understand that the Elisa is not a worthwhile test and they will order the Western Blot alone. 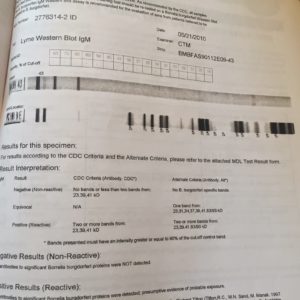 The CDC requires 5 positive antibody bands on the Western Blot in order for it to be a positive test. Unfortunately, these tests were never created to diagnose Lyme disease but only to provide surveillance when Lyme first became a problem. Several necessary antibody titers are not even included in this test and a few that are included are unnecessary.

There are many other reasons why this testing requirement is causing hundreds of thousands of people to become chronically ill and misdiagnosed.

The ILADS organization recognizes that Lyme Disease does become a chronic infection. This occurs when the bacteria have been present in the body for more than 4 weeks.

It’s important to understand that your body doesn’t even produce antibodies to Lyme until after 4 weeks. Testing before this time doesn’t make sense. The antibodies from Lyme are not always constant once you have chronic Lyme meaning that you could be positive but test negative. A false positive Lyme test does not exist.

Finally, there are 100 strains of Lyme bacteria in America, the Western Blot only tests for 1 strain. Do you see the mounting problems with testing? So, why trust a test that is inaccurate, requires 5 positive bands and won’t detect antibodies until after it’s too late?

What should you do?

I highly recommend that you find an ILADS Lyme Literate Medical Doctor or Naturopath who can help you navigate through the Lyme Maze. Ask around, find others who have or had Lyme and ask for references. If you’re not sure, check the ILADS website for how to find a doctor.

These doctors will listen to your health history, examine you and look for symptoms that may or may not indicate Lyme. They can also test you through more sensitive testing with specialized labs where Lyme and other tick-borne infections are studied.

If you’re the one sick, chances are you’re suffering from brain fog and may have a hard time making sense of it all. It may be a good idea to bring someone with you who can take notes, listen to the doctor and ask questions.

Timing is very important. If you’ve been bitten seek out medical care as soon as possible. Realize that you may not get symptoms right away. In many people, symptoms will slowly occur over the course of months or years.

It’s also very important to know that ticks never carry just one bacteria. They carry other bacteria like Bartonella, and Ehrlichiosis, parasites like Babesia, viral infections – the newest being the Bourbon virus, and other things like worms.

Why should you care about Lyme disease?

You should care about Lyme disease because it’s the fastest-growing chronic infectious disease in America. It’s very difficult to get a diagnosis unless you know what it is and what to look for. It’s very expensive to treat. It will change your life!

If you’d like to learn more check out my favorite blog links and you’ll find wonderful resources. If you search on your own try to find ILADS supported information.

Manage Cookie Consent
We are using cookies to give you the best experience on our website. You can choose not to use them if you don't want to but that may alter your browsing experience.
Manage options Manage services Manage vendors Read more about these purposes
View preferences
{title} {title} {title}