Lyme disease is highly controversial and difficult to detect.  It is even more difficult to determine whether or not our children may have gotten an infection without the tell-tale signs of a classic bulls-eye rash.

It’s estimated that around 25% of Lyme disease cases each year are children. Children ages 5-15 seem to be most at risk.

Many times, children will have very mild symptoms, to begin with.  Mom and Dad may not recognize that they have Lyme but will notice that their child may be more tired than usual.

They may not want to go out to play or be with their friends.  They may begin to have difficulty with school and complain of stomachaches, headaches, and car sickness.

If the child also contracted one or more of the many coinfections such as Babesia, Bartonella, Mycoplasma or Ehrlichia they will exhibit many additional symptoms such as feet pain, muscle spasms, migraines, urinary incontinence, and more severe psychological symptoms. 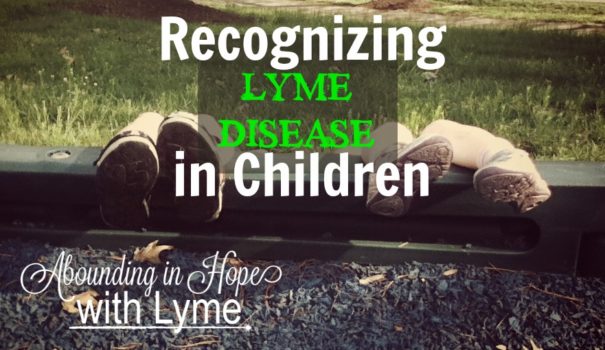 All four of our children have chronic Lyme disease.  I struggled for several years to get an accurate diagnosis for them.  Two of my children had known deer tick bites but no other initial symptoms at first. One daughter never had a tick bite that we knew of, only a spider bite.  My son developed mild symptoms shortly after birth.

I took my two daughters to the pediatrician each time they were bitten by a deer tick and each time I was given false information which I believe led to them becoming chronically ill. The first time I was told that my daughter could not get Lyme disease because the tick was not attached for more than 24 hours. Now I know that it does not take 24 hours for a tick to transmit a Lyme infection.

The pediatrician wrote a prescription for her to have exactly 2 Doxycycline pills as a precaution.  This does nothing to prevent infection and can alter a Lyme disease blood test. At a later time, I took my other daughter in because she had an odd rash which appeared about a week after I removed a tick. Our pediatrician told us that she did not have a bulls-eye rash and therefore could not have Lyme disease.

Only 50% of infections produce a rash and 50% of those rashes are bulls-eye.

As a Mom, I want to know why our pediatricians are not being taught the correct information about tick-borne diseases. Why are they not taught to recognize an early Lyme infection so that our children don’t become chronically ill?  Why don’t they know the proper treatment protocols?

Instead, I was thrown the CDC “Bible” stating that there’s no such thing as chronic Lyme disease. 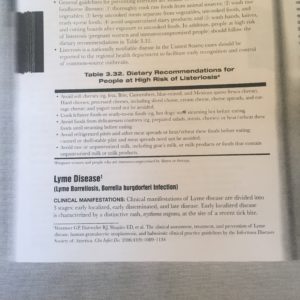 When I learned that I had chronic Lyme, I began to recognize similar symptoms in my children.  I was heartbroken and angry because I knew it could have been prevented.

When my youngest daughter later began having psychiatric symptoms, learning difficulties, and behavioral problems I pursued Lyme testing again because I had read literature regarding Lyme presentations in children, and the symptoms matched. My pediatrician once again assured me it couldn’t be and handed me a list of parenting books to read. I knew in my heart that my child was suffering from chronic Lyme and so I pursued testing for her with a specialty lab only to find out that she indeed had Lyme disease as well as Bartonella and Babesia.

Our doctors do not know everything and they are not being trained to understand or even acknowledge that Lyme disease is a problem in our society. If you, the parent, are not educating yourself you could very well miss the opportunity to prevent a chronic Lyme infection in your precious children.

Here are key symptoms to help you identify a Lyme infection in your child. 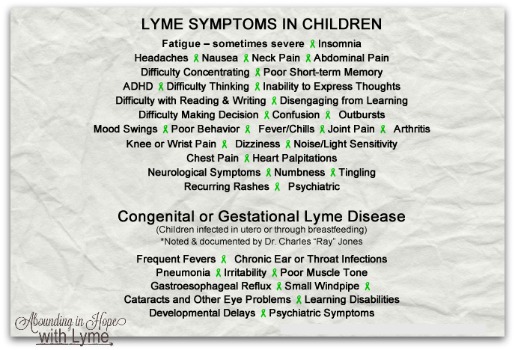 Many Lyme literate physicians have found that Lyme indeed can be transmitted through pregnancy and breastfeeding. Click To Tweet

When I was pregnant with my son, I began having symptoms that I now know were from Lyme disease. Thankfully, we know that my son has Lyme disease, his symptoms are mild but because we are aware we are able to have him treated appropriately. No parent wants to see their child suffer. My children have lost so much of their childhood and of their critical teens years by being sick with this painful and devastating disease.

Ask your pediatrician what their views are about Lyme disease.  Some doctors are willing to give the appropriate dosage of medication when a tick has been found.

ILADS recommends treating each and every tick bite with 21 days of Doxy and longer if there are any symptoms at all.

Some pediatricians will even offer to send the tick off for testing so that you can be sure to know whether or not an infection is even possible.

If there’s one thing I’d like to leave with you, it’s that you would dedicate a little of your time to understanding what Lyme disease is and how to recognize an early infection or a chronic infection in order to get the proper diagnosis and treatment.

For further reading and research