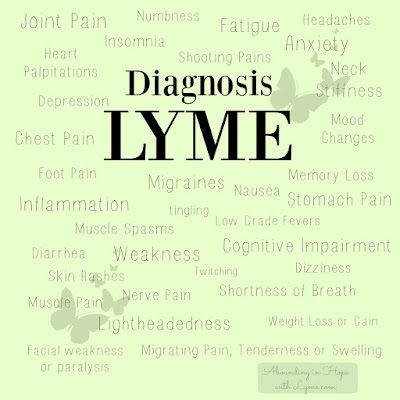 I remember that day, the one when I was so happy to learn that I had Lyme Disease.

Obviously, at that time I had no idea what I was in for, nor did I know what Lyme disease was.

I remember that day like it was yesterday. There I was sitting in the doctor’s office waiting as she reviewed my labs, watching as she shook her head indicating she knew what the numbers on the page meant.

Finally, she said, “Well, you definitely have a Lyme infection, and based on these numbers (pointing at the labs) you’ve had it for quite some time!”

After hearing her words, a sigh of relief came over me and I was actually happy. For two years I had bounced around to different doctors, had labs drawn multiple times and practically lived at the physical therapist’s office.

During this time, each doctor evaluated me according to their specialty and either said they didn’t know why I was so sick and sent me to another specialist or they would diagnose me as psychosomatic, which means they thought the cause of my illness was in my head and caused by STRESS.

I was livid because I was really very sick. I knew what stress was, I had grown up and worked in the Washington DC area. I knew that what I was experiencing was not stress. Honestly the only thing that was causing me stress at the time was their misdiagnosis and lack of compassion.

At the end of the two-year mark when I finally had a positive lab test for Lyme, I initially had an appointment with my primary care physician who stated in a matter of fact way, “Your test is positive for Lyme but I believe this is a false positive and that you’re just stressed out because you have 4 children, 1 being a new baby and you’re trying to homeschool!”

Can you imagine being told that? I couldn’t walk without intense pain, every time I turned my head I strained my neck muscles; my shoulder, elbow and hip felt broken, my entire body throbbed in pain. I slept for 14- 20 hours a day, I had no memories of past events or conversations and could not process simple thoughts and tasks. I had a long list of other symptoms that none of my doctors could explain.

I verbalized my disagreement and frustration with this doctor and I stated that I would be getting a second opinion. She recommended the doctor down the hall who had been treating people with Lyme.

A few weeks later it was confirmed that I did indeed have Lyme.

I was so happy that I finally had a diagnosis, someone actually believed me and I felt that now I could begin to heal.

Most often, Lyme disease goes undiagnosed or misdiagnosed and can be confused with almost any other disease including cancer. It can affect every part of the body and every system and can cause inflammatory markers on lab tests to make doctors believe you have a different disease or condition.

Never settle for the “stress” diagnosis if you’re really sick and have multiple unexplained symptoms. Listen to your gut and get as many opinions as you can until you are satisfied.

Knowing what I know now through research and experience, I always think tick-borne infections first and then work my way backwards.  Many doctors believe that other biting insects like flies, spiders, fleas and mosquitoes can transmit these diseases and that they are more common than previously thought.

The CDC states that each year 300,000 people are diagnosed with Lyme.  This number is grossly understated because approximately 70% of those tested for Lyme are missed.

I always say, know your Lyme facts, educate yourself and be prepared before you need to.

HELPFUL LINKS
Read more about why you can’t trust a Lyme test: Testing for Lyme Disease
Want to know how to find a doctor?  Check out Looking for a Lyme Doctor
Here’s a handy print out to take the doctor with you if you’ve been bitten by a tick:  Tick Treatment
Learn how to recognize Lyme disease in your child.  Recognizing Lyme in Children