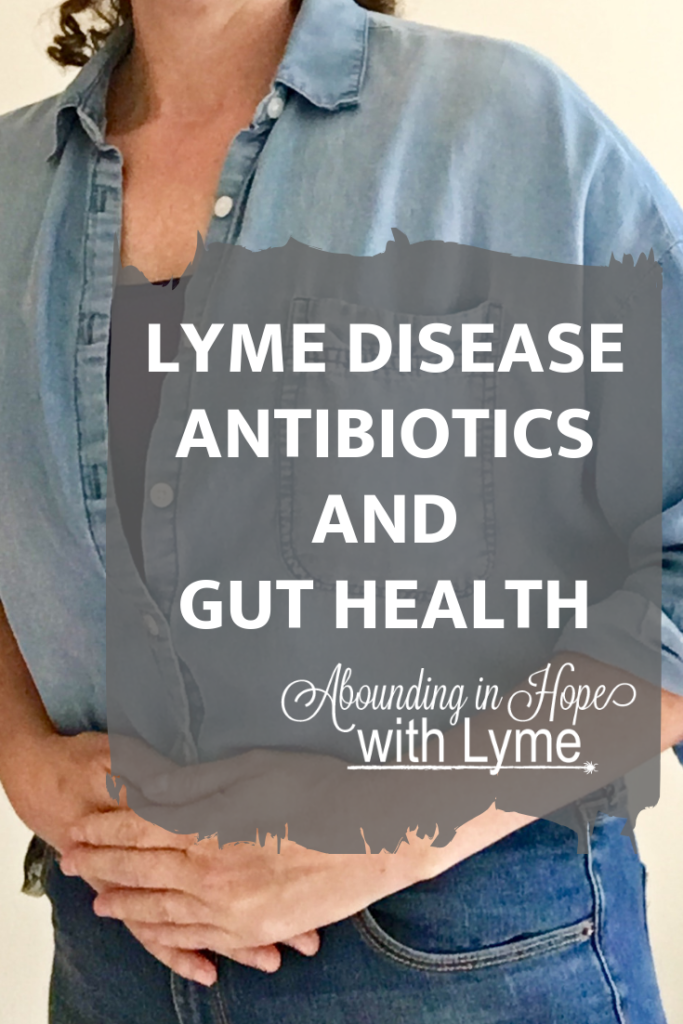 When I was diagnosed with Lyme disease in 2009 I was terrified. I didn’t know anything about Lyme disease or how it should be treated. Information was limited and I wasn’t aware of any treatment options other than antibiotics. So, based on what I had read and the enormous fear I had, I accepted my doctor’s recommendation and took multiple antibiotics at one time. My created a longterm problem with my health and a miserable gut!

Lyme and the Gut

Borrelia burgdorferi, the bacteria that causes Lyme disease, have a particular preference for the gut. “In a review of gastrointestinal and liver problems associated with tick-borne diseases, Lyme disease expert Dr. Richard Horowitz found that 5 to 23% of those with early Lyme had symptoms such as nausea, vomiting, abdominal pain, anorexia with loss of appetite, and hepatitis; some had enlarged liver or spleen.”[1] Other tick-borne infections like Ehrlichia and Bartonella can also cause gastrointestinal problems. [2]

Over the course of four and a half years, I took many different combinations of antibiotics. I was also prescribed an antifungal medication to help combat yeast and an antiparasitic medication for Babesia, a parasitic co-infection to Lyme. As you can imagine I suffered from horrible digestive side effects despite using very expensive probiotics.

Additionally, I took Florastor (Saccharomyces-Boulardi) which is a good yeast and is helpful to prevent c-diff. I maintained a very strict diet eliminating gluten, dairy, all processed food, and all sugars including fruit.

Antibiotics are also very hard on the liver and so I took liver protective herbs such as dandelion root and milk thistle.

Despite my best efforts to prevent side effects, as soon as I began taking antibiotic I immediately started having negative side effects. I had bloating, gas, diarrhea, pain, and cramping.  After long-term use, I began having burning in my intestines, acid reflux, yeast in my mouth, fungal infections in my ears, psoriasis and other skin rashes. I had already been having acid reflux, stomach pain, and vomiting as a result of Lyme and that was before antibiotics.

My symptoms caused pain so severe that I went to the Emergency Room at least three times that I can remember. Despite all the scans, bloodwork and tests the emergency room doctors told me there was nothing wrong with me. They gave me morphine for the pain and sent me home to follow-up with a Gastrointestinal Doctor. The GI doctor told me that because my scans and blood work were normal, my symptoms, which were very severe mind you, were psychosomatic!

Psychosomatic means it’s caused or aggravated by a mental factor such as internal conflict or stress! New Oxford American Dictionary [3]

It was that third trip to the ER and my frustrating experience with an inconsiderate GI doctor that convinced me antibiotics were not the answer. Many of my symptoms from tick-borne diseases were resolving but every time I tried to get off the antibiotics my symptoms would return with a vengeance. Fear had kept me on antibiotics but the side effects were just not worth it to me anymore.

Taking Charge of My Gut Health

Once I stopped taking antibiotics I had to work very hard to restore my gut. I began juicing, continued using probiotics and I used bentonite clay for four months. If you’re thinking about using bentonite clay please consult your physician first. You really need to do your research to make sure you get a high-quality clay. Start slowly, drink a lot of water and back off if you have any adverse reactions.

Bentonite clay definitely helped but I continued to have flares of intestinal pain, diarrhea, gas, bloating, and constipation. I couldn’t seem to get myself to a place where I would have normal bowels. When I tried something new I would feel better for a time but the slightest change in food or stress would cause my gut to react negatively.

It takes a long time to heal your gut especially if you’ve taken antibiotics or other harsh medications. It takes a lot of hard work and diligence to get to a place where you feel somewhat normal. I had finally gotten to a good place with my gut and then we moved to a home which is on well water. I drank it believing the standard water tests were trustworthy and that well water would be superior to city water! Maybe it is but not too long after moving I began having gut problems again. Part of my reaction was the mold I was exposed to but I decided to purchase a Berkey water system just in case and I began working on my gut again.

What You Can Do

If you’re taking antibiotics for Lyme treatment, please purchase a high quality probiotic. Take it several hours apart from your antibiotics. Follow the manufacturer’s directions and if the probiotic needs to be refrigerated then be sure to do so. Talk with your Lyme literate physician about taking Saccharomyces Boulardi which is a good yeast and combats the negative yeast that antibiotics create. The brand I took was Florastor. I had tried other brands but nothing worked as well for me. Controlling your diet is also incredibly important. Eliminate sugar altogether, gluten, dairy, and sugary carbs. Make sure you’re getting enough fiber and drinking plenty of clean water. If these suggestions are too overwhelming for you, a nutritionist can definitely help you put together a plan.

The after-effects of long-term antibiotic can be quite severe and it may be beneficial to get a SIBO (Small Intestinal Bacteria Overgrowth) test. In my experience, traditional doctors, including Gastrointestinal doctors have not been very successful in helping me to address my gut problems or to recover. I’ve found that if I choose doctors who are more holistic, I tend to get positive results. I look for functional doctors, naturopaths, holistic nutritionists and other physicians who specialize in holistic gut health.

80% of your health is dependent upon your gut health so pay extra special attention to that aspect of your healing protocol. #guthealth #healLyme #Lymedisease #aboundinginhopewithlyme Click To Tweet

Finally, take a look at your emotional health. While emotions and stress are most likely not the cause of your gut problems they certainly do play a role. Anxiety, depression, and stress definitely impact your gut and your ability to heal from Lyme disease. If you’re struggling with your emotional health as a result of your long-term illness with Lyme disease seek out a professional who can walk you through the complexities of living with chronic illness. Many therapists can teach you valuable coping skills.

Remember, 80% of your health is dependent upon your gut health so pay extra special attention to that aspect of your healing protocol and if that’s not included, take steps today to include it.

[2] Could Your Digestive Symptoms Related to Tick Borne Infections?